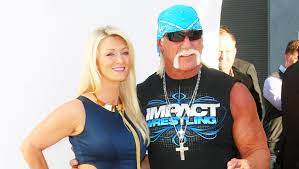 In a tweet he shared late on Monday February 28, Hogan also announced that he has a new girlfriend amid online speculation about his relationship status.

Yo Maniacs just for the record,the Facebook and Instagram posts are of me and my girlfriend Sky,I am officially divorced, sorry I thought everyone already knew,love my Maniacs4Life

Prior to his social media announcement on Twitter,  Hulk Hogan had been spotted with a woman in Clearwater, Florida.